After squaring the two ends I stood the workbench slap on edge on the pseudo-bench and marked the areas of the rip-sawn edge that weren’t square to the true face.  To support it I clamped offcuts from my leg blanks to the slab and the pseudo bench.  Remember that the pseudo bench is also clamped to a 150 pound cast iron angle plate to dampen the wiggling.  Very Rube Goldberg.

Here you can better see the areas I marked that were out of square from the true face.  I pretty consistently had the rip saw canted slightly.  It was about 1/8″ off along this edge, but mostly straight along the length of the rip.  The dark spot at the far end is from some oil I’d put on the saw blade to protect it.  I used wax on the saw plate, and I’ve started using was on my plane bottoms — I was really surprised how much of a difference it makes on planes.

The blue tape at the far end is a small chunk that I chipped out, and glued back in.  After the glue dries I’ll go over the edge once more to make sure everything is clean. 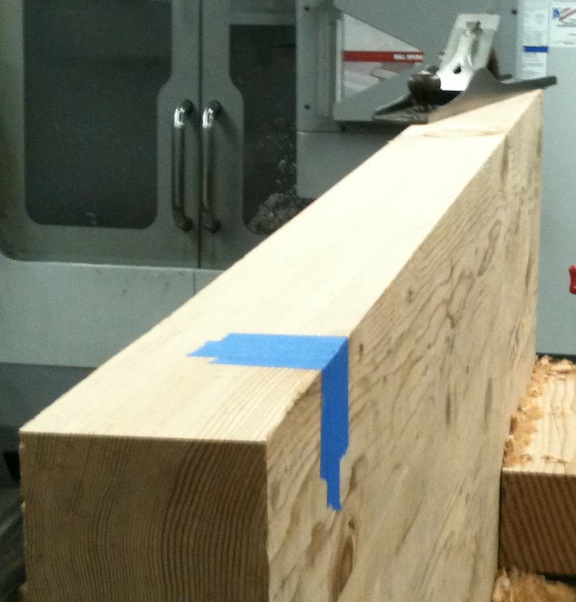 I just have the one face of the workbench slab to flatten, I’ll have that done this weekend for sure, and if I hustle I may have time to cut some practice leg joints.