I started out on the road to hand tool woodworking with an inexpensive pull saw from the big box store, then I restored a Disston D8 and had Dr. Phil at Bad Axe sharpen it.  Now I’m Hooked on Hand Saws(TM).  I won’t bore you with the saws that have recently feathered my saw nest, but I decided that I needed to learn how to sharpen saws myself.

Currently all the saws I have are razor sharp, so I needed something to practice on.  Again, eBay to the “rescue”.  I got this gem for under $20 with shipping.  This is the picture from the eBay listing, but I added the red line.

The price was right.  It’s a Diston with brass fasteners and a nice handle that looked to be in good shape.  The blade, no so much.  I actually didn’t notice that the toothline was so far out from being straight.  It’s worse in person.  The tip is also bent slightly.  The bent tip isn’t a huge concern because my plan was already to shorten the saw an inch or two — I want to make a “panel saw”, with a fine tooth rip pattern.

Here you can see the disaster that passes for a toothline.  The heel and toe are resting on the surface, there is at least 1/4″ rise in the middle.

Before the saw arrived I was thinking that I’d re-sharpen and re-shape the teeth, but after looking at the saw it really needs to be re-toothed.  I’m thinking that I’ll scribe a straight line from the heel to the toe and shear it off, then file in new teeth.  But first I think I’ll sleep on it.

I don’t know how well you can see this, but about 2″ back from the toe there is a distinct bend in the blade.  It could probably be straightened, but I’m pretty sure I’ll just shorten it.  If I shear the toothline so it’s straight the tip of the saw will come to a point anyway, shortening the length will mean less metal to remove along the working edge.

I really like the shape of the handle.  It’s not in terrible shape, although it has it’s share of nicks and dings.

So, after work tonight I disassembled the saw.  I striped the handle with lacquer thinner and steel wool.  That got a lot of dirt off, and the tiny bit of finish that was still on the handle.  Then I sanded out the worst of the nicks and chips, and gave the handle an overall sanding with 220 grit.  There is a little loss of detail in the carving, but it’s not as extensive as the picture makes it look. 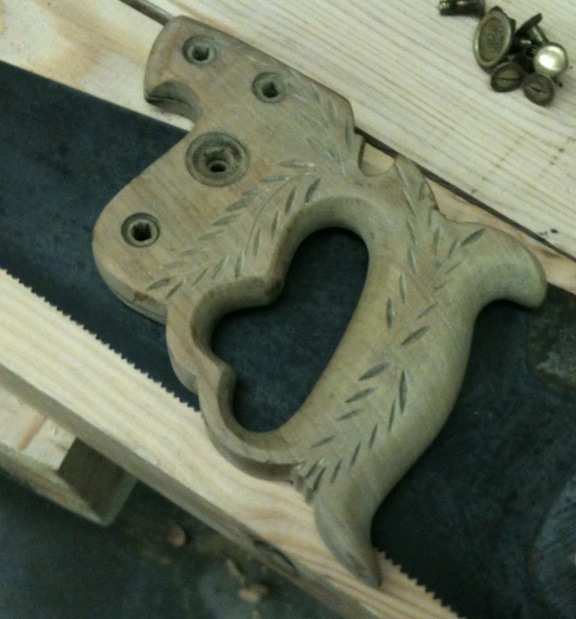 And finally I dropped the handle in a bad of “danish oil” to soak for a few hours.  I’ll pull it out later and let it dry overnight before putting some varnish on it.  I used a similar procedure on the handle for the D8 that I restored and it really seemed to bring out the color in the handle nicely.  Tomorrow, time permitting, I’ll start on the saw plate. 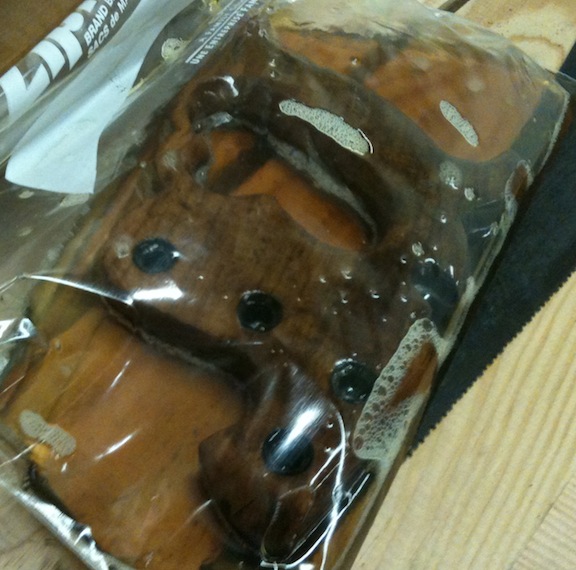