Forward Progress on the New Sconce

Posted on September 8, 2013 by joemcglynn

I hate it when I’m at this point in a project — struggling with some new technique that I’m not very good at.  Some days it seems like I’m always doing something for the first time.  And sometimes that’s OK, it’s fun to learn new techniques.  Sometimes it’s more of a struggle than I like.

The specific rock I’m rolling up hill today is the piercing on the sconces.  I could make a slot with a small router bit, but I don’t think that would look right.  I also am not a huge router fan.  I don’t have a religious objection to them (or to any tool, power or otherwise) but when the solution to any woodworking problem is a router I think it shows in the finished part.  Plus, I really want to be good at hand tool work.

So on Friday I called Lee Marshall at Knew Concepts.  Lee is an interesting guy, I met him years ago when he was making hydraulic presses for metal smiths with his company “Bonny Doon Engineering”.  I’ve wanted one of his fret saws for a while, and this was enough justification to push me over the edge.

Here is my secret weapon for the piercing

Here’s a dirty little secret, I can’t saw a straight line with a fret saw.  I’ve known this for a long time.  I took some Jewelry and metal smithing classes years ago and had a hard time with this then.  Lee’s saw helps a bunch, the blade doesn’t deflect or wander like the cheap fret saw I already had.  Now it’s all down to me getting my coordination down.

I made a few practice cuts, then sawed out a new pattern based on my updated drawing.  I’d like to tell you that I sawed this out right to the line, but I’d be lying.  I was reasonable close though, and I used a chisel to trim a few spots.  Then I had a small brainstorm and I sheared off some strips of .080″ thick Aluminum sheet, and stuck some PSA sandpaper on one side.  It is thin enough to fit into the narrow areas, and stiff enough to hold it’s shape.  I was feeling pretty confident at this point.

Sawing out the actual rails is a bit tougher.  Any tiny variation from holding the saw absolutely vertical and the cut isn’t plumb through the stock.  It doesn’t take much of a mistake to be WAAAAY off on the bottom side.  I sawed one rails as close as I could, then used the .080″ thick mortise chisel I made together with the little sandpaper files to clean it up.  I also cut the grooves in the lower rail for the inlay.  Just three more rails to do the piercing on and I can glue this up.  At the rate I’m going that’s probably 3 weeks…  Good Grief.  I need to pick up the pace here.  Maybe I should have bought a scroll saw.

Note that I planed down the top faces of the rails so I have more of a shadow line between them and the stiles.  I also made a replacement rail for the one I ruined last weekend, and I made several extras.  For all of the struggling though, Im very pleased with the results.  Maybe after I’ve cut the other three rails I’ll have a better handle on this particular skill, which would make it all worthwhile. 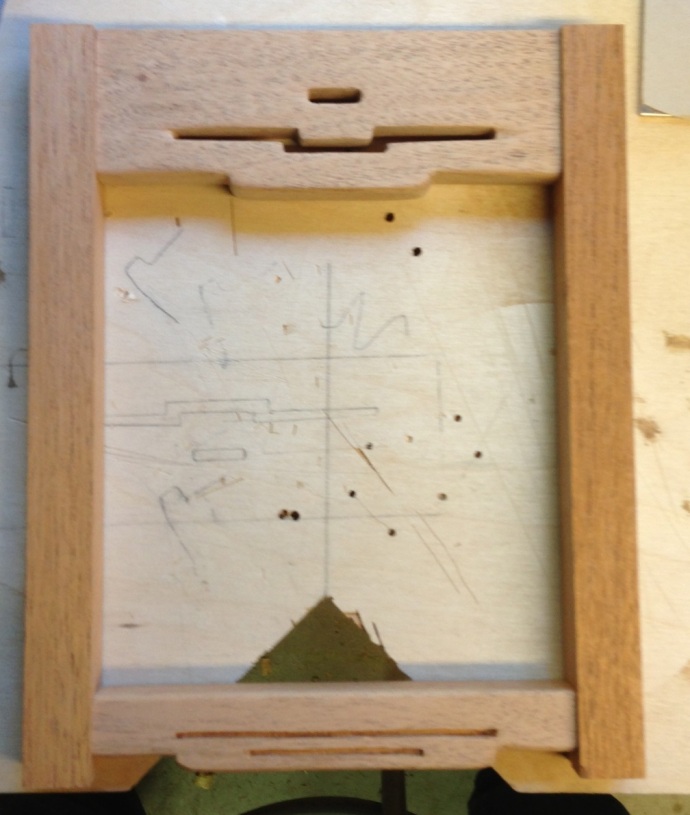 One Down, Three to go

One thought on “Forward Progress on the New Sconce”