Apparently third time is a charm.  There were two things about this project I was concerned about being able to pull off.  One it the egg crate dividers, the other is the door.  Of the two, the dividers had me more concerned because they have to fit snugly into the case without any gaps.  I did my best to make a square carcase, which simplified getting the dividers in.  But it took three tries to get the dividers built.

The first attempt I had the notches on the vertical dividers too tight and the and the “tabs” split off.  Rats.  No, really, that’s what I said.

About half way through cutting the slots in the second set of dividers I realized that I’d picked up the wrong off cut to lay out the the spaces.  I was using an off cut from the slightly-thicker vertical dividers instead of the correct-thickness horizontal dividers – .375″, in case you’re interested.  I should have been more interested. 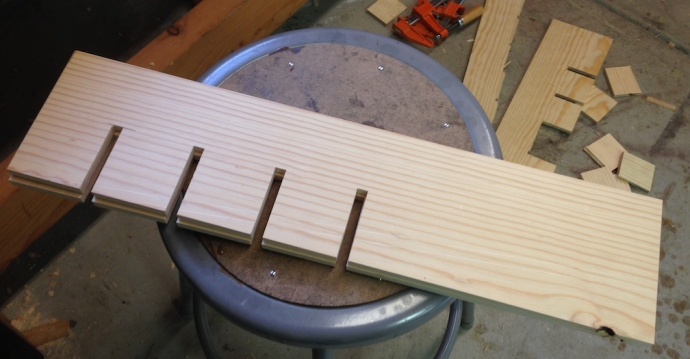 So, rewind again.  I machined up another pair of vertical dividers and used the correct bit of scrap to do my layout.  Third time lucky, as they say.  (I don’t know who “they” are, but I wish it was “nailed it on the first try” instead).  This time it worked out OK.  I padded on a couple of coats of orange shellac and left it to dry while I grabbed lunch.

In case you’re following along with the plans, I made the dividers 5.5″  wide instead or 6″ as called out in the article, so I could get two parts out of each 1 x 12.  I don’t think it will have any serious impact on the function.

These should fit OK…

I started all of the notches at the same time — if they are a little tight anywhere and you do them one at a time is really easy to split off one of the tabs.  If you work them all together at once, a little at a time, they all tend to support each other.  I got the fit just about right, they slid together without much persuasion until the last little bit.

I fit the dividers into the case carefully.  I had to slightly pry the sides open as they were ever so slightly bowed in.  Just finger pressure.  I drove the dividers down until the horizontal bars were 8″ front-edge-to-back-of-case.

I used the little layout gizmo from the article to mark where the ends of the dividers were on the outside of the case, and laid out pencil lines so I could drive in the nails to secure the dividers in the case.  That worked really well too. 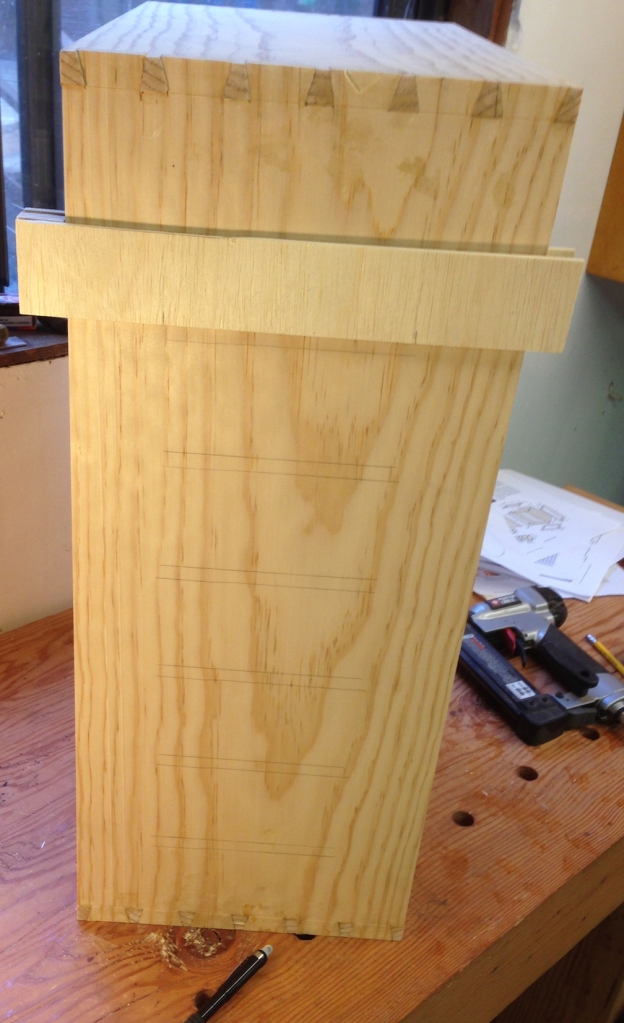 Laying out the guide lines for nailing

The “layout gizmo”, slide it over the carcase side, align with each divider and mark the outside of the case.

I also pined each of the interactions with my 23 gauge pin nailer.  That worked really well, and it really tightened the divider up nicely. 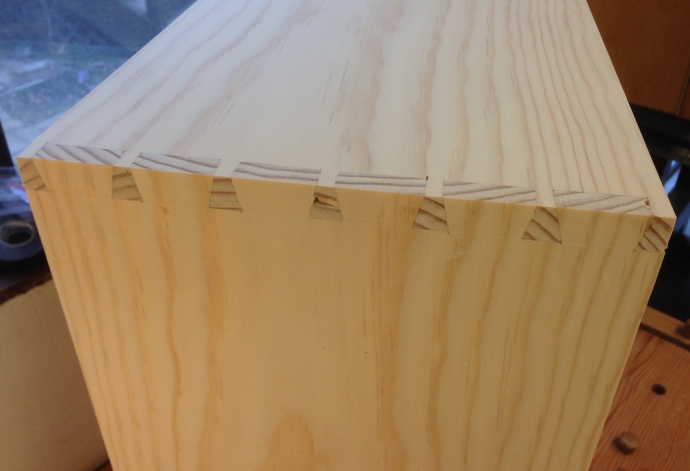 Dovetail Glamor Shot. Not perfect, but not terrible either.

I’m still surprised this worked out…

In the February 2014 issue of Popular Woodworking (available online, free!) Chris Schwarz contributed an article on Roy Underhill’s nail cabinet.  I’ve seen that in the background of every show I’ve watched, but never realized what it was — this is the picture that is on the inside door of the cabinet. 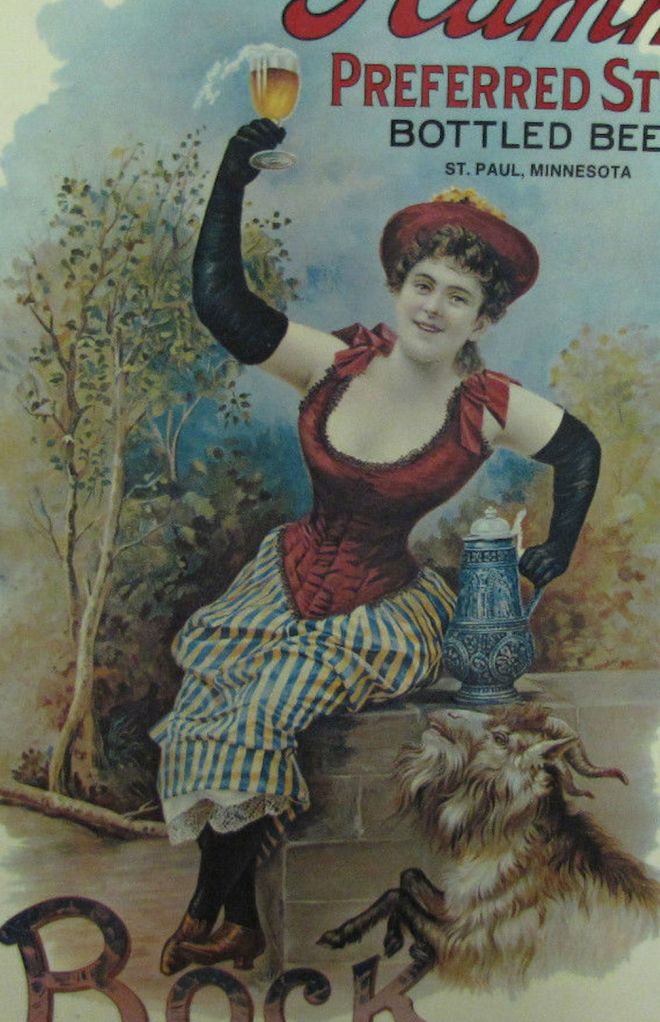 Anyway, I had three 1×12 pine boards in the shop and a couple of days before I go back to work, so I decided I’d build it.  It’s a little bit of an odd piece.  As the story goes, the original was made by some unknown woodworker out of a match crate.  The plans reflect that, you basically build a crate, fit it with egg crate dividers and 21 drawers.  I wouldn’t have designed it like this…and I almost re-designed it, but instead decided just to build it according to the article.

I started by laying out the sides and top/bottom for the carcase on a 1×12.  I used my power tools to dimension the parts.  I’ve decided I like dimensioning stock with a planer and jointer when I can.  It’s fast and efficient and accurate.  I planed the sides to 1/2″ (per the instructions), the top and bottom were supposed to be 3/4″ but by the time I got the worst of the cupping out it was a bit over 5/8″.

Now I get more dovetail practice, yippee!  I did the “140 trick” — planing a shallow rabbet in the ends of the tail boards.  This gives the board s positive edge to register against the pin board when transferring the location of the tails.  It worked really well.

I think my next project needs to be a Moxon vise, it would really help with dovetailing wide boards.

Ready to cut the tails

It’s probably not clear in the pictures, but I ganged the two sides together and cut the tails on both boards at once.  The rabbet is on the inside faces of these boards, so you can’t see it. 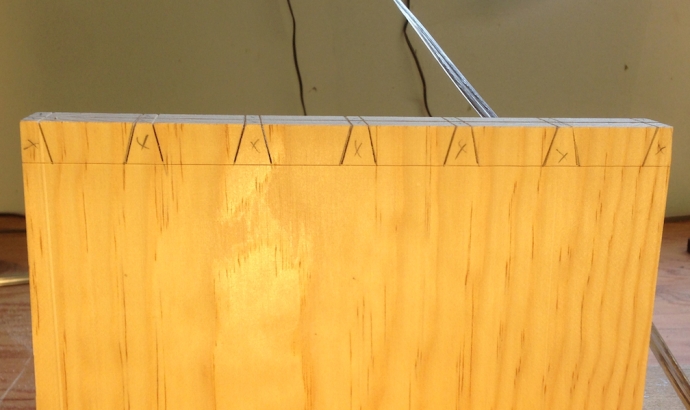 Transferring the tails was simple since I had a nice clean rabbet to align the boards.  I had some small issues with the stability of the pin board.  It is slightly cupped, and not well supported on the right side (and it flexes).  This is why I’m eager to build a Moxon vise, that will totally solve this sort of problem.

I dry fit all of the joints as I chopped them, then I dry fit the entire carcase and checked it for square.

Overall, I’m pretty happy with the dovetails on this.  I had a few small issues.  Unfortunately, none of the will show in the finished cabinet, they get covered with battens to make it look like a crate.

This is what I’m building

After a final dry fit I disassembled the carcase, lightly sanded the inside faces with 220 and rubbed on a coat of orange shellac.  Then I buttered all of the pins and tails with Titebond III and assembled it.  I checked the diagonals and it is square.  I’m going to start making the egg crate dividers for the interior next.  That’s the part that I’m most concerned about.  If the case is out of square or bowed it isn’t going to fit well.  It just gets nailed in too.  like I said, not how I would have designed it, but it should work out ok.  Right?  Fingers crossed…