After the aborted first attempt at excavating the inlay cavity, I decided to try again.  I applied a couple of coats of shellac to seal the wood, hoping that it would make the layout lines more visible — it didn’t.  Or at least not by much.  I followed the same process as last time — glue the inlay down with Duco cement, trace around it with a fresh Xacto knife, pop the inlay off and excavate with the mini router.

The hardest part of the whole inlay process was accurately excavating the cavity to fit the inlay into.  I expected it would be sawing the parts, but I was wrong.  What made the inletting difficult (aside from the fact that it’s 100 degrees in the shop) is a combination of tool problems and ergonomics.

I’m having issues with the mini router base not holding it’s position and a few other small issues.  I’ve been emailing with William Ng, and I’m sure he’ll get it sorted out for me.

The ergonomics are a little more of a problem.  I didn’t have a good way to get hold the part at the right height, I didn’t have a good solution for clearing the chips so I could see the line, and the lighting was bad.  I made do, and I have an idea for how to make that better next time.  In fact, I think between getting the tool and ergonomics dialed in I’ll have a much better result and more relaxing time of it overall.

The actual process of inletting was a matter of “hogging” the bulk of the waste out with a 1/8″ bit (if you can consider it “hogging” with a tiny router bit).  I tried to stay about 1/16 off the line as I was hogging out.  Then I switched to a 1/16″ bit and snuck up on the walls, watching for my scribed line to disappear.  Sometimes the line would disappear, but when I looked closely the surface where the wood was scored would come off, but lower in the cavity the wall would still be sticking out.  So the process included a lot of fine tuning until the inlay seemed like it would snap in. 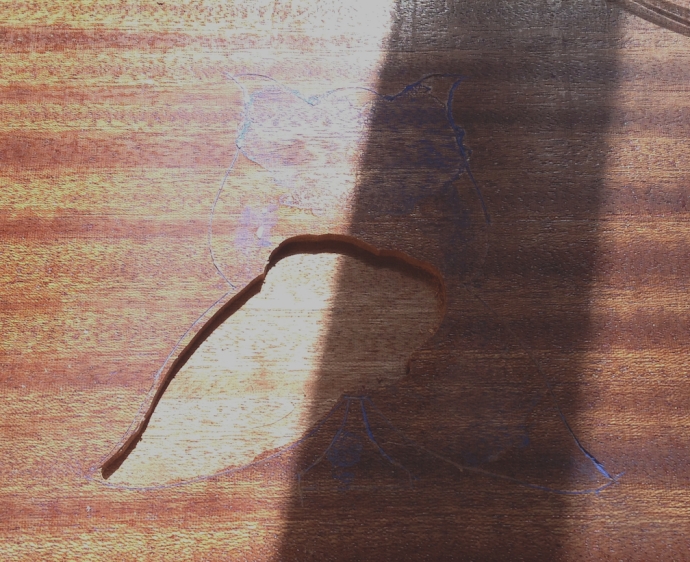 Beginning to “hog out”. It’s not a great picture, but when I’m working I can’t see the line any more clearly than this (sometimes less)

After a couple of rounds of back-and-forth fine tuning (and the requisite amount of overshooting the line, and only a moderate amount of swearing) I had an inlay-shaped cavity I thought would work. 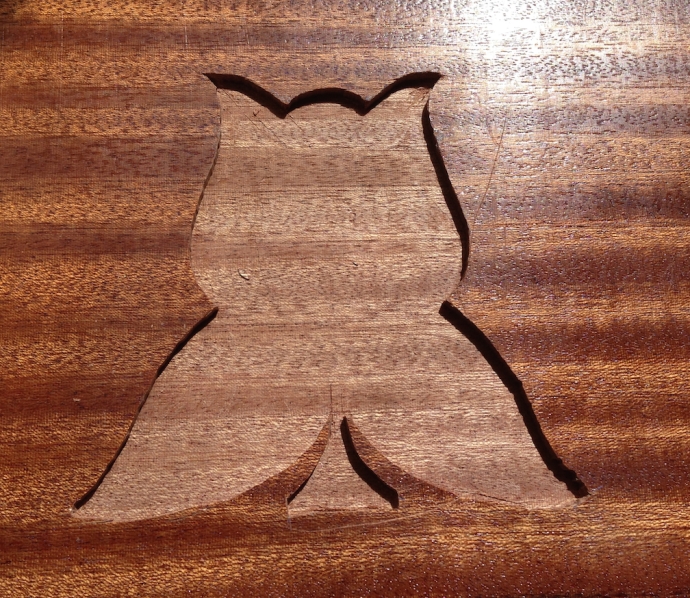 Cavity ready for the inlay

I filled the bottom of the cavity with Superglue and pressed the inlay in.  The little base had broken loose from the main part, which wasn’t a problem.

Superglue in, now add the inlay pieces which I previously glued together)

I put a sheet of waxed paper over the inlay, added a caul and clamped it in my leg vise for two hours.  It was with a fair amount of trepidation that I pulled it out to check.  I was surprised at how deep the inlay was in the wood.  I’d sawn the veneer about .125″ thick, and only routed the cavity .075″ deep, but it was almost flush.  I think this was from sanding the back of the inlay assembly to remove glue, I’ll have to watch that in the future.

I started flattening this with 100 grit glued to some plywood scraps.  60 grit would be better, the 100 loaded up pretty quickly.  I had to sand the inlay flush, sand off the glue, shellac and paper.

Once that was done I checked for any pinholes and gaps and filled those with Superglue.

Fill any gaps with glue

Done! Finished with a light coat of Linseed oil.

So I’ll give myself a C+ for effort on this.  It’s obviously got some problems when you look at it up close, although it isn’t a complete disaster.  The problems I see are almost exclusively with the excavating of the cavity.  A little neater job on that, and this would be presentable.  I can see some problems with the sawing too, but surprisingly then almost disappear in the finished piece.  And I’d I’d inlayed this into a dark wood the gaps around the edge would be nearly invisible.

Before I do this again I need to get the router base sorted out, and set up better ergonomics for the process.  Tomorrow if it isn’t too hot I might finish the Thorsen cabinet…