I have a secret desire to get this Marquetry Chevalet done quickly.  OK, maybe it’s not secret anymore, but still.  The reality is I’m going to run out of Chevrolet car model years to joke about long before I sawing marquetry packets.  Oh well, I’ll get it done eventually.

I found a build up blog over on Lumberjocks by Mike Lingenfelter he shows in 8 posts the construction and adjustment process of fabricating his Chevalet. I picked up a couple of tips, but it was also instructional to see how long it took him to do.  He started on October 6 2013 and by January 4 he was tuning it to cut correctly.  Three months, that probably what it will take me too although I’d like to cut that in half.

Fitting the upright to the base took some time,  I went slowly so I didn’t make a mess of it.  I planed the rough spots off the tenon cheeks, then pared the walls.  The finished fit is fairly snug without any gaps along the faces so it should be plenty strong.

The first fit of the upright to base joint

Then I did the cut out detail on the base, drilling holes for the rounded end and sawing out the waste in between.  A little work with a plane and a task cleaned that up likely.  I sawed the outer corners and blended them in.  After it’s all assembled I’ll probably run a round over but around everything to get rid of the sharp edges.

Drilling holes to define the “feet”. I’d clamped a bit of scrap to support the drill since I was only cutting half a diameter into the base.

The two remaining steps are to saw out the detail for the top of the upright, and add on the side supports for the saw support clamp.  I have the stock prep’d for the support clamps, and laid out the cut for the top, but ran out of time.  Another hour or two and this part will be done. 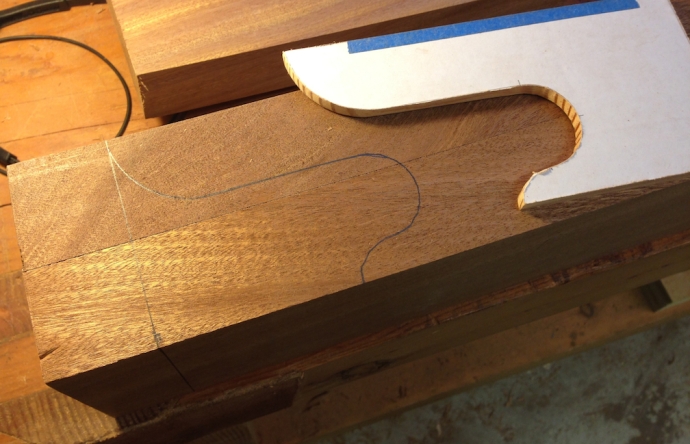 Template for the top of the upright. This shape helps catch the little parts that sometimes pop out of the back of the packet.