Posted on November 3, 2014 by joemcglynn

Before we move on to the point about hand-sawn tenons, here are the progress shots from the weekend.  Not as much progress as I’d hoped, but I had to go buy more wood, and it was my wife’s birthday and there were important preparations to be made!

Double tenon on the top of the vertical post. The faces and shoulders were cut with a dado stack (the part horizontal on the table saw). The faces between the tenons cut on the bandsaw, and the waste chiseled out.

I screwed up the bridal joint, I was trying to cut it to the exact size but ended up with a slightly loose joint.  Crud.  I cut a thin (~1/8″) slice and glued it to one face of the bridal joint, then used a hand plane to smooth both faces for a snug fit.

For reference, this is the dry-fit assembly that I’m working on: 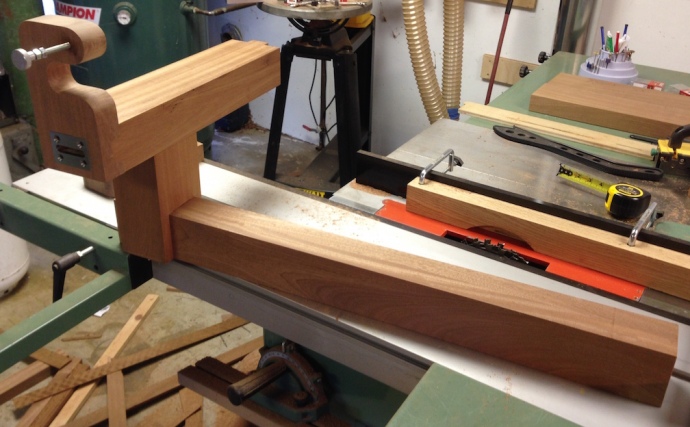 Dry fit assembly of the saw support assembly. This is from the perspective of the front of the Chevy.

Now on to the main point of this post.  It’s been bugging me how much I’m doing with power tools.  Not that I have a religious objection to power tools, but really from the perspective of efficiency.

I’ve done tenons several different ways.  I always lay them out with a marking gauge or knife and square, but the way I cut them has varied.  I cut some by hand, including the ones on my workbench.  I’ve never been good at hand sawing tenons, and I’m very out of practice now.  Most commonly, I set up a dado stack on the table saw and chew away the waste from the face of the tenon.  I set the fence to control the length of the tenon, and raise the the blade to set the depth of the shoulder using a piece of scrap.  Then I can knock out a bunch of identical tenons, but it’s time consuming to switch the table saw over to do that, and then back again.  Just for completeness, I’ve also cut tenons on the table saw with the tenon vertically (I absolutely HATE that method, very scary!) and on the bandsaw.

If I need to do a batch to identical tenons, it’s probably worth setting up the table saw.  Like when I made the two Blacker house sconces, that was 32 tenons I had to cut.  But for something like this where I have one tenon to cut, it’s a real time sink to set up the table saw.  Maybe the bandsaw is a better method, but I think hand sawing might actually be nearly as fast to make the cut and perhaps more accurate.

In that vein, let me offer something I saw posted on Derek Cohen’s “In The Woodshop” website, a magnetic saw guide for cutting tenons.  This looks like it could make the setup very fast, and the results very consistent.  The recessed magnets hold the saw plate against the jig, just adjust the jig to your layout lines and saw away.

From inthewoodshop.com, a nifty tenon jig

Part of why this is on my mind is that I need to make the saw frame for the Chevalet next (ish).  Once I finish the CAD model of the saw frame I’ll post it, but it’s essentially a large finger joint, with the fingers just under 1/4″ thick, two fingers on the arms and three and the back of the saw.  Any inaccuracy on that is going to be problematic, and it’s not something that can be easily done on the table saw (read: vertical orientation and a special jig).

Plan “A” is to make some test cuts on the bandsaw, plan “B” is to hand saw it, maybe with a jig like this.