In general, I’m not much of a “practice” guy.  Generally I approach stuff by trying a technique, then quickly move to using it in a project.  I learned to gas weld by building a roll cage from round steel tubing for my 1973 Firebird.  I did one practice joint and beat it with a hammer until I was convinced that it wouldn’t fall apart, then started welding on my car.

Dovetails were probably an exception to this.  I did some practice joints — that were absolutely terrible — before I made a dovetailed box.  I read something the Christopher Schwarz wrote about doing a dovetail joint every day for 30 days.  I made it less than a week before I was feeling discouraged by the pile of kindling accumulating on the floor.  I’ve since gotten competent at dovetailing, although as I type this I wonder if I should go back to practicing.  But I digress.  Jump in, feet first.

And it’s competency that I’m after with Marquetry.  And I’m actually designing a series of experiments and practice projects to test the waters on different processes so that I can build a real project with confidence.  Marquetry is very understandable process, but there are a lot of little fussy steps and opportunities to screw up.  Ask me how I know…

So, with that mindset I identified a couple of activities I wanted to practice with:

So, first off the blades.  The blades for the Chevy are longer than both other similar fret saw and scroll saw blades.  They are 160mm, and in my (humble and seriously limited) experience are usually 2/0.  I’ve heard of others using finer blades for marquetry, down to 8/0.  I can’t imagine.  They are thin, I should have included a pencil line for scale.  I’m actually surprised the teeth show up in this picture, I need a magnifier to see them in the shop.

In class we used both, and I struggled to cut at all accurately with the coarse tooth blade.  It’s the classic tradeoff between speed and control.  Both blades seem to leave identical kerfs, but I found that the coarse blade needs a really light touch to be able to saw on the line.  Even then, my cuts with this blade were wandering around like a drunken sailor on a moonless night.  I did better than in the class, but still not great.

Flowers and asymmetrical shapes are really forgiving.  No one will notice if a petal is slightly wonked.  The picture below is the worst from this project, the rest of the cuts obliterated the line, but weren’t as regular as they should be.  With the Boulle technique all the parts are guaranteed to fit.  I want to work up to the the “piece-by-piece” method where individual parts are cut, well, individually.  I have a ways to go.

This is the *worst* of the cuts from this project. A moment of inattention and I’m all over the map. The error here is maybe 1/16″ at the worst. No big deal in this case, but if this was lettering or a regular shape it would be a problem.

When I did the last marquetry experiment I used the 72tpi blade as I wanted to be as accurate as I could for the practice.  With eight layers of veneer plus the waster veneer on the front and back of the packet it was really slow going.  Probably a couple of minutes for each little piece.  For the approximately 40 pieces in that picture it was easily three hours of sawing.  With this project the (approximately) 40 pieces took maybe 45 minutes to cut.  I was just getting in the groove.  Granted, there were only four layers of veneer, plus the wasters, in this packet.  I’ll have to do a timed comparison that is fair, but suffice it to say it more than twice as fast to use the 32tpi blade.  If I can get to smooth, accurate cuts with the 32tpi blade it will be a happy day in the shop.

I also practiced laying out the parts in an “exploded diagram” of the image as I sawed them out. I had these first pieces sawn out before I thought to take a picture!  (I’m only doing the main rose, none of the other elements — this is a section of a larger image I want to use on a project soon) 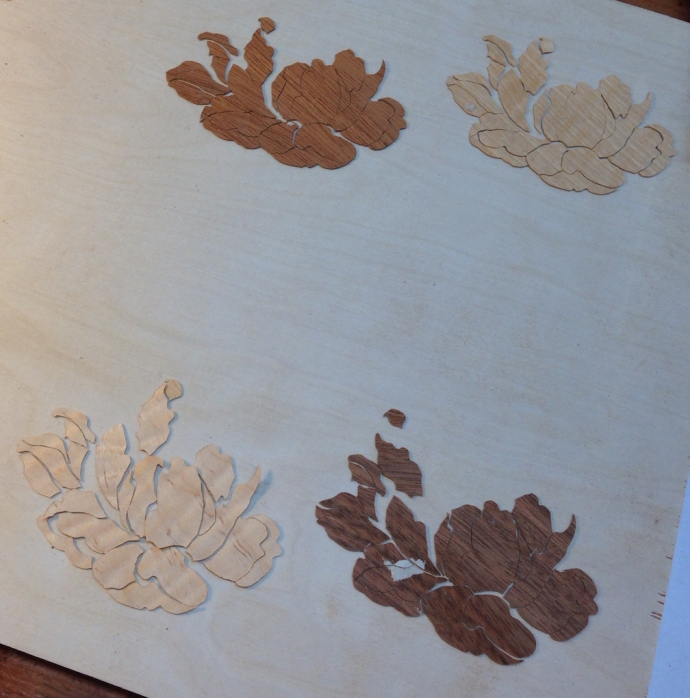 Here are most of the parts of the rosebud laid out for sand shading. After this the pieces were too confusing to know where they went. I’m wasting too much time here shuffling parts.

…and the rest of the parts.

I’m further along than this, I’ll wrap up the sand shading and assembly in the next post.  Then I’ll be designing some practice experiments with pocket hole screws.

One thought on “Marquetry Experiments”