The press is done, now what?

I cleaned up the press pieces after the glue up, and slathered them with a mix of linseed oil, mineral spirits and poly.  I just wanted to bring out the color in the wood a little, and add some tiny bit of protection.

This morning before work I installed the screw jacks.  Not much to report on that — I had to file a couple of notches into the hole for the ribs on the metal bosses, drive them in and run a couple of screws in to secure them.  I guess I need to do some marquetry now, I’m rapidly running out of tool-based excuses.  I’m so screwed…(pun intended) 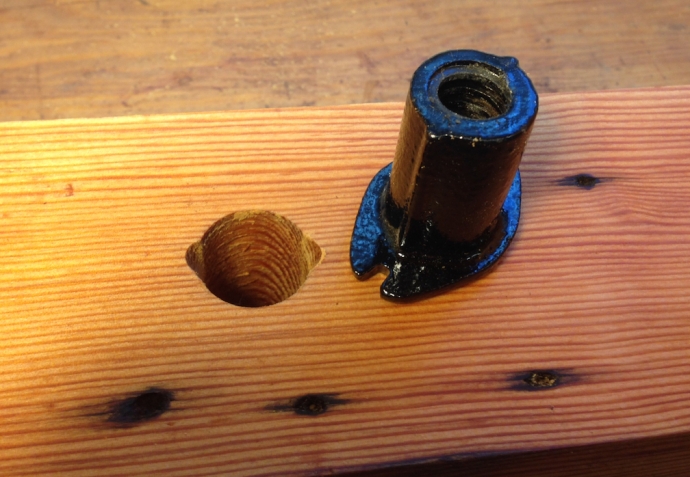 File notches for the alignment ribs in the screw jack bosses 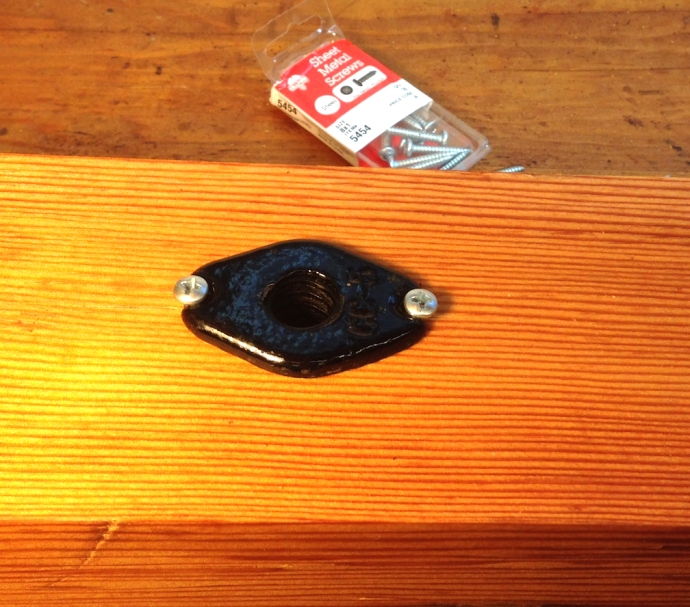 The past couple of weeks I’ve been stalled in the shop, I’m happy to report I was able to move past it this weekend and finally make some progress.

Rewinding, I decided that I wanted to incorporate marquetry into a real project.  Not just little practice panels, but a small cabinet or something.  Maybe a tool chest with marquetry inside the lid.  But before I could do that I needed a way to press larger marquetry panels.

The process I’ve been using involved first laminating newsprint onto the show face of the veneer to reinforce it.  Then assembling a packet of six or more layers of veneer and backer materials and sawing out the design.  The parts are assembled face down onto a kraft paper covered board, then flipped and glued to the final substrate.  A lot of manipulation and clamp juggling, more than is good for my blood pressure.

So this project, building a press, is a necessary step for me.  Or so I’ve convinced myself.  Last weekend I got the reclaimed fir rough machined, at the expense of two bandsaw blades ruined on embedded nails.  Out of two 14′ long 4″ x 6″ reclaimed beams I still ended up short on materials due to nails and cracks and rot.  I had enough offcuts that I was able to laminate some of them to make up the shortage.

I was short two of the 19″ long vertical posts, so I laminated some scraps from the reclaimed wood.

Once the scraps were laminated, I machined everything to the final size, about 3″ x 4″.  I still have the two “green” replacement posts in this stack…just in case something was wrong with one of the other parts.  I’m happy to report I won’t be needing them. 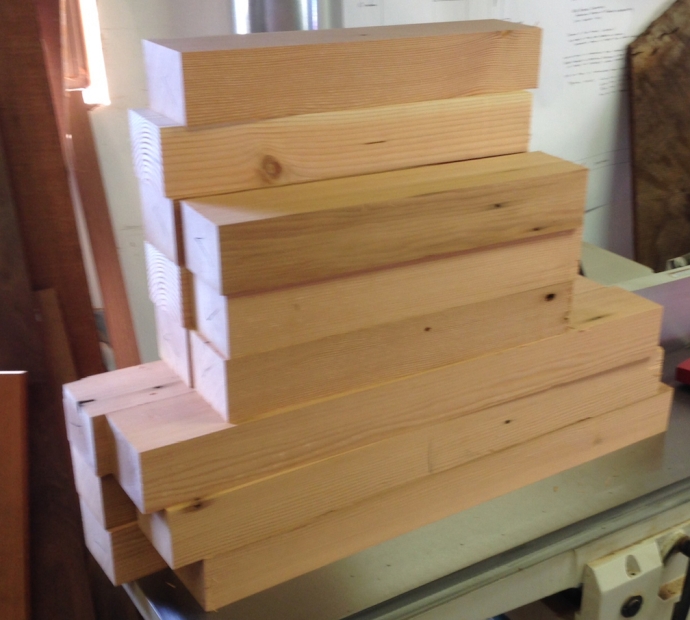 This was intended to be a quick and dirty project.  I laid out the mortises and cut them, then rough cut the tenons, with the intention of doing a little fine tuning to get the final fit.  The very first mortise/tenon fit up was a struggle, and ended up having a snug but gappy fit.  All of the rest of the joints went together smoothly.  Not big gaps, with a snug fit that required a hammer to assemble.

I used my power tools on the joinery, because it’s quick and consistent.  But it always feels like cheating.  In retrospect this probably would have been a good time to practice sawing tenons by hand.  Chopping mortises in fir is not my idea of fun.  The Sapele I used on the Marquetry Chevalet cut really nicely with a chisel, but my experience with fir is that it dulls tools and doesn’t shop across the grain well at all. 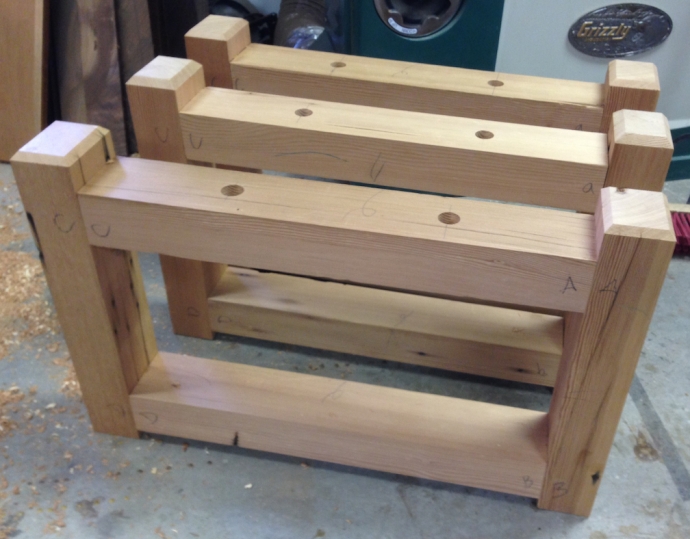 I dry fit all three frames for the press, drilled the holes for the press screws, and disassembled the frames so I could sand the inside faces.  Then I glued the joints and cinched up the clamps to draw everything tight.  I’ll pull the clamps this week and do the final cleanup so I can check this one off.  I think the fir will look good with some oil/varnish applied. 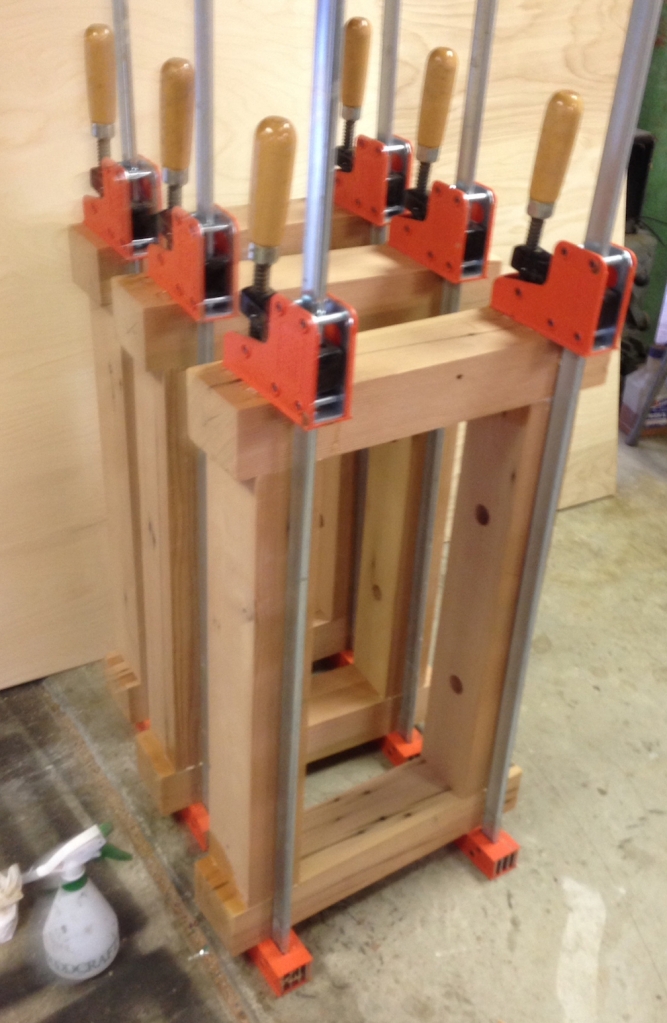 In processing the lumber for my marquetry press, two of the shorter components ended up unusable.  Too many nails.

The simple solution would be to pick up some green construction lumber at the local yard.  So I did.  Cheap, fast, easy.

Check out the difference in growth rings.  The reclaimed wood, from a 100 year old barn has fine, tight growth rings.  While the piece I picked up today is very coarse and has less than 1/4 of the growth rings per inch. 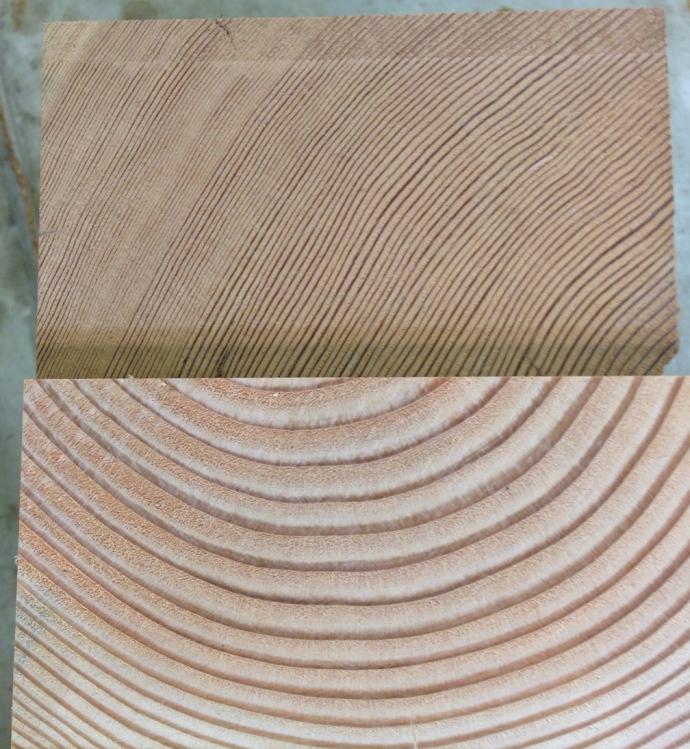 I can probably use the new wood, but I don’t like the look of it.  I’m going to try gluing up some of the scraps instead.

James Brown Is Not In My Shop

Regular readers of my blog, who already deserve sympathy for wading through endless drivel here, will have noticed I haven’t posted anything in the past couple of weekends.  Truth be told, I’ve been in a bit of a funk and it’s had me stalled.  Hopefully I’m moving past that, because it’s time to Get Up Offa That Thing.

I’ve been stalled on what seems like the simplest of projects, making a press for marquetry.  Maybe it’s too simple, just three square frames put together with mortise and tenon joints.  I got stuck on the wood.  I don’t like the though of spending $7+ per board foot when I need probably 25 to 30 board feet total for a simple shop appliance.  I thought about using green construction lumber, but every time I looked at 4 x 6 fir beams with splits, knots and oozing sap I lost my enthusiasm.  I thought about just making a simple welded steel frame, and probably should have done that, but I wanted wood on this.  And my TIG welder has a leak in the water hose.  Gotta fix that.

Long story made interminable, I finally bought some salvage 4 x 6 fir beams from a 100 year old barn that had been dissembled.  It was still too much money, but I’m over the hump. 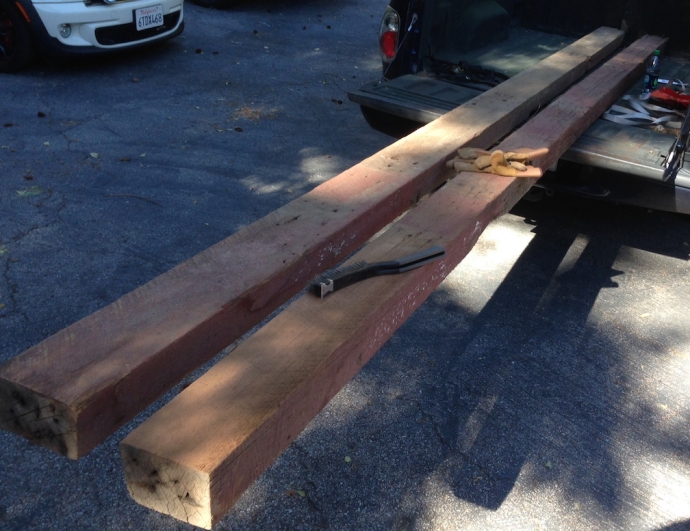 Two 4″ x 6″ beams from an old barn. I think I paid extra for the peeling paint and nails.

I spent the better part of a day wire brushing off dirt and loose paint, digging out rusted nails and laying out cuts to avoid the knots (there weren’t many) and nails (there were a ton).  Yeah, it was a pain in the butt, but Papa Don’t Take No Mess.

The number of nails in these was sort of unbelievable.   I tried to avoid using the heavily nailed sections where the Boy Scouts held their Jamboree practicing for their Nailing Merit Badge, but geez…

I laid out my rough cuts, six at 30″ and six at 19″.  A couple of these look a little dicy and I don’t think their will be enough slid wood left.  One of the short pieces is on the bench for open-nail surgery when I took this picture.

I dug out the nails I could see, then used my #6 to take off the skin and make sure I had all of the nail bits out (I didn’t).  It’s a lot easier to resharpen the hand plane than the power tool.

Pretty, but probably not enough strength left in this part.

After a lot of sweat and dust I got the crust off of the boards, and established my reference edge and face on all of them.  Amazingly, there is a lot of really pretty old growth vertical grain fir here.  Unfortunately, I’m short at least two of the short pieces for the uprights.  Not sure what to do about that yet, although I’m pretty sure I’m not going to go buy more of this reclaimed fir.  It’s a crazy amount of work to get to usable material.

The next goal (besides taking pictures that are in focus) will be to re-saw these to the right width and thickness, then plane them smooth and square.  I’m waiting for the replacement blade for my bandsaw to arrive, because the last one had an unfortunate encounter with several nails.  I’m probably going to skip the arched top in my design, I just want to get this built and put it to work.

I’ve been in a bit of a funk lately and haven’t had time in the shop — but I have been thinking about what I want to do next.  I’m ready (ready-ish) to do a more complex marquetry project that will be an actual finished piece and not just practice (or kindling).  To do that I need a better way to to be able to clamp large sheets of veneer when laminating paper onto it, and for clamping larger marquetry panels.  Juggling a dozen clamps isn’t my idea of fun, although I guess that begs the question of what is my idea of fun.  Let’s let that one go for now.

Making a press should be a simple enough job, although I’m always looking for any opportunity to complicate things.  Really any wood is OK, and I was on the verge of buying green construction lumber for it at the home center but just couldn’t reconcile myself to it when I looked at all of the knots, splits and oozing sap.  Also not my idea of fun.  While I’m trying to decide on stock I ordered the hardware and drew up an idea in CAD.  The hardware is Jorgenson 12″ press screws.  I’m actually pleased with the quality, I saw some off-brand ones and the threads were really poorly made, these are crisp and smooth.

The design is simple.  It’s a series of three square frames, each with two screws.  The lower platen will be removable so the press can be packed away and not take up too much room when I don’t need it.  I may actually make a bracket so I can hang then on the wall out of the way.  The joinery is twin tenons into through mortises.  I’ll pin the joints with pegs.

CAD model for a Marquetry Press

The press will handle up to 24″ x 36″ panels, way more than I can even anticipate doing right now.  The arched tops on the upper crossmember add some work, but I think they look nice.  Next chance I get I’ll go lumber shopping and see what I can find.  In the meantime I drew up some simple plans to get me focused.  It might be overbuilt, but I don’t think it’s under-built. 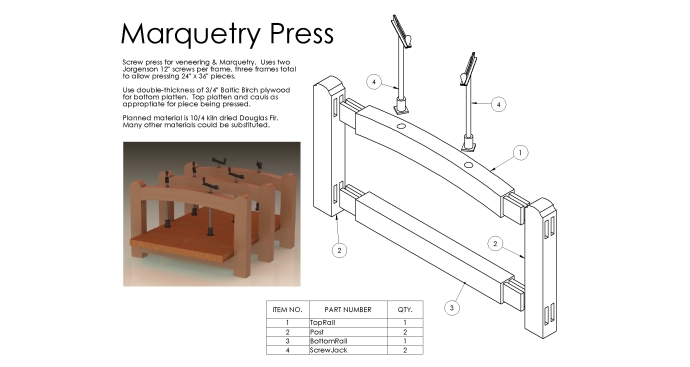 Plans for a marquetry press