James Brown Is Not In My Shop

Regular readers of my blog, who already deserve sympathy for wading through endless drivel here, will have noticed I haven’t posted anything in the past couple of weekends.  Truth be told, I’ve been in a bit of a funk and it’s had me stalled.  Hopefully I’m moving past that, because it’s time to Get Up Offa That Thing.

I’ve been stalled on what seems like the simplest of projects, making a press for marquetry.  Maybe it’s too simple, just three square frames put together with mortise and tenon joints.  I got stuck on the wood.  I don’t like the though of spending $7+ per board foot when I need probably 25 to 30 board feet total for a simple shop appliance.  I thought about using green construction lumber, but every time I looked at 4 x 6 fir beams with splits, knots and oozing sap I lost my enthusiasm.  I thought about just making a simple welded steel frame, and probably should have done that, but I wanted wood on this.  And my TIG welder has a leak in the water hose.  Gotta fix that.

Long story made interminable, I finally bought some salvage 4 x 6 fir beams from a 100 year old barn that had been dissembled.  It was still too much money, but I’m over the hump.

Two 4″ x 6″ beams from an old barn. I think I paid extra for the peeling paint and nails.

I spent the better part of a day wire brushing off dirt and loose paint, digging out rusted nails and laying out cuts to avoid the knots (there weren’t many) and nails (there were a ton).  Yeah, it was a pain in the butt, but Papa Don’t Take No Mess.

The number of nails in these was sort of unbelievable.   I tried to avoid using the heavily nailed sections where the Boy Scouts held their Jamboree practicing for their Nailing Merit Badge, but geez…

I laid out my rough cuts, six at 30″ and six at 19″.  A couple of these look a little dicy and I don’t think their will be enough slid wood left.  One of the short pieces is on the bench for open-nail surgery when I took this picture.

I dug out the nails I could see, then used my #6 to take off the skin and make sure I had all of the nail bits out (I didn’t).  It’s a lot easier to resharpen the hand plane than the power tool.

Pretty, but probably not enough strength left in this part.

After a lot of sweat and dust I got the crust off of the boards, and established my reference edge and face on all of them.  Amazingly, there is a lot of really pretty old growth vertical grain fir here.  Unfortunately, I’m short at least two of the short pieces for the uprights.  Not sure what to do about that yet, although I’m pretty sure I’m not going to go buy more of this reclaimed fir.  It’s a crazy amount of work to get to usable material. 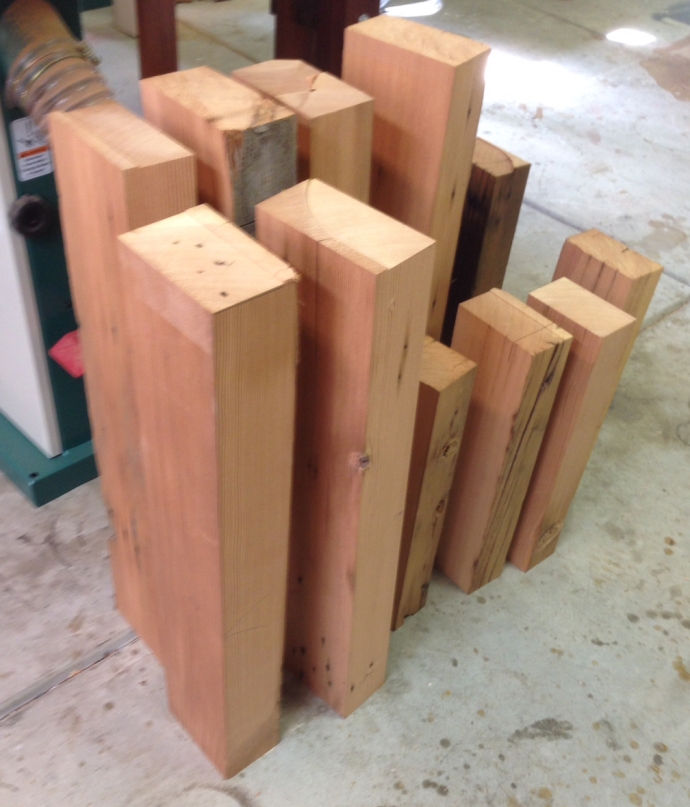 The next goal (besides taking pictures that are in focus) will be to re-saw these to the right width and thickness, then plane them smooth and square.  I’m waiting for the replacement blade for my bandsaw to arrive, because the last one had an unfortunate encounter with several nails.  I’m probably going to skip the arched top in my design, I just want to get this built and put it to work.

7 thoughts on “James Brown Is Not In My Shop”