Posted on September 4, 2012 by joemcglynn

After hardening and tempering the two floats and the chisel it was pretty much downhill, and I ended up not taking a lot of pictures.

First I re-filed the teeth on both floats, twice actually.  First to remove the scale from the torch, then I jointed them, applied Dykem and filed them again.  I’m not totally happy with the side float (the one with the wider teeth on the face), the teeth aren’t as even and accurate as I’d like.  But it works well enough, so enough fretting over aesthetics.

Test run of the floats on a scrap of Walnut

Next I needed to make some handles.  I trued up my 3 blocks of Walnut and used my newly made 1/10″ chisel to mortise a slot for the tangs.  It worked well, but as I got deeper it became more difficult to pop the chip out.  Eventually I got all three done.  Then I did a little shaping on the handles and rubbed them with some oil.  I was going for a tapered, facetted look. 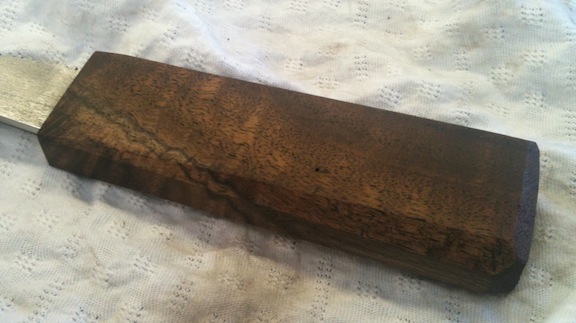 One handle roughed in

The handles came out reasonably well – I was shooting for functional.  I want to put another coat or two of finish on the handles, then I’ll epoxy them onto the tools (they are just slightly loose on the tangs).  The chisel worked really well chopping a 1.5″ deep mortise that was only 1/8″ wide.  If I do this again I’ll make a chisel that is a full 1/8″ wide for chopping the mortise for the tang.  And yes astute reader, that would put me one more degree away from my original interest – which was to just try sticking some molding.  Which required a pair of hollow and rounds, which required a set of plane floats, which required a special chisel for the float handles.  That lived in the house that Jack built.

The real question is what do I do now?  Do I track down some quartersawn Beech or Cherry and try making a pair of hollow and round planes?  Or do I file this away (no pun intended) for a while and finish my saw chest?  Probably the latter.  Baring any new brain spasms I think I want to finish the saw chest (it just needs the lid and interior keepers, plus finish), and then the workbench.  Yeah, it would be good to finish the bench within a year of starting it…where the heck does the time go?  I wonder if my legs are dry yet… 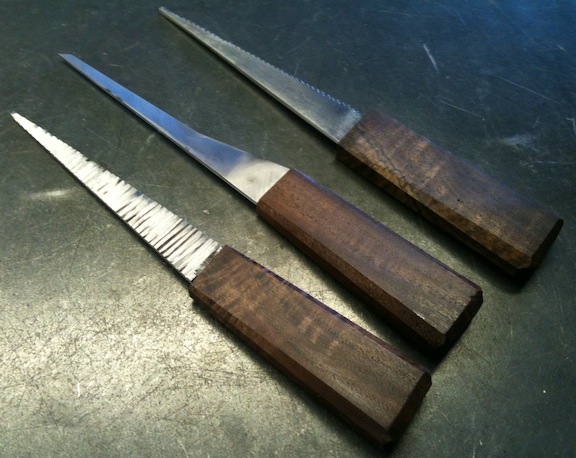 Posted on September 3, 2012 by joemcglynn

I spent some time in the shop yesterday working on my plane making toolkit.  I’d previously profiled two float blanks and a matching chisel.  I started with the side float, at the widest end – that way it’s all downhill from there right?

After a few strokes of the file

I decided almost immediately that I couldn’t see what I was doing clearly enough, so I got out the red Dykem layout fluid again.  I also used a hacksaw to start each tooth.  The files I’m using are too small (4″ double extra slim triangular), and they are also not a great quality.  They go dull too quickly, I used probably 8 files on just this one float.

After adding the Dykem it was much easier to keep track of what I was doing.  I would cut a few notches with the hacksaw, then file the tooth profile.  I had to lift the file to work more on the far side of the wide teeth to keep them even from side-to-side, since the files were too small.  Like with filing teeth on a saw, the completed tooth should reach the center of any face of the file or it is using up the life of the next edge of the file.  I didn’t bring each tooth to a sharp edge, I tried to leave a thin red flat at the top of each tooth.

After I worked down the entire length of the side float I re-coated it with Dykem and reversed it end-for-end.  I filed it again, still leaving the tiny flat at the top of each tooth, just to get the teeth as even as possible.  I need to file the tip into one more tooth still, I missed that yesterday.

The edge float went really fast, not surprisingly.  First I transfered the layout of the teeth using a series of small hacksaw kerfs.  You don’t need much of a kerf, I went a tad too deep on a couple.

Now file in the teeth.  Hold the file so the leading edge is vertical or even slightly undercut.  As before I didn’t take the teeth to a sharp edge yet, I’ll do that after heat treating.  The spacing isn’t perfect, but it’s more important that the tops of the teeth all be in the same plane.  Using the tiny flats at the tip of each tooth assures that. 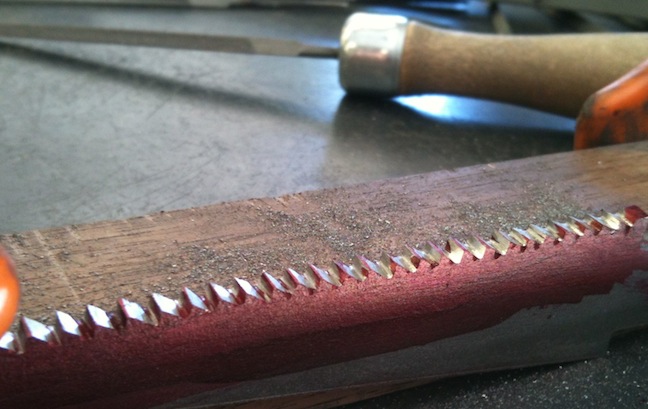 Filing the Teeth in the Edge Float

I also thickness ground the chisel to .100″ thick, it didn’t take any time at all with the 50 grit belt.  I sanded out most of the grind marks before heat treating.

Heat treating involves two steps, hardening and tempering.  I treated this the same as I would O1 tool steel.  Bring it up to the critical temperature slowly, hold it for a bit and then quench it in oil.  That gets the steel to it’s maximum hardness, but it’s also brittle.  Tempering removes this at the expense of some of the hardness.  I baked the parts for 1.5 hours at 500 degrees.  Thanks to Kolya for his expert camera work!

While the parts were baking in the oven (do clean off the oil residue first, unless you enjoy domestic angst) I started making some handle blanks.  I had a scrap of Walnut that I cut into three blocks roughly 2″ wide by 4.5″ long.  I squared the ends and drilled some 1/8″ holes to start excavating the cavity for the tangs.  Once the parts are tempered, cleaned and sharpened I should be able to use them to clear out the waste. 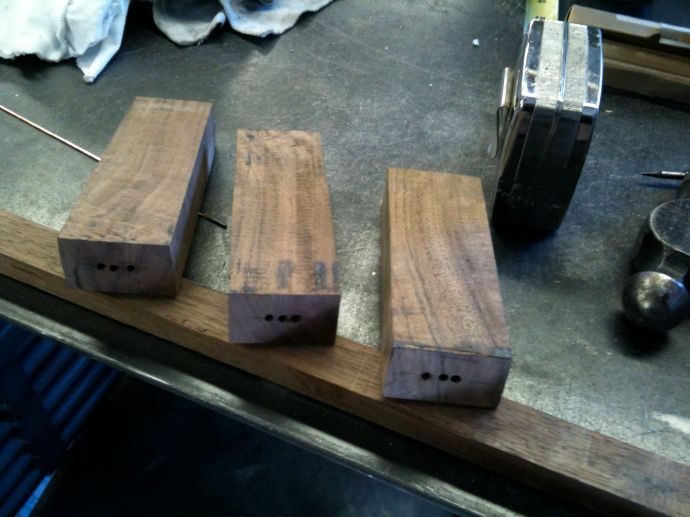 Posted on September 2, 2012 by joemcglynn

After watching the DVD on Making Traditional Side Escapement Planes, I decided that making a couple of plane floats sounded like a fun project.

I started by doing a layout in SolidWorks and printing out full scale drawings of two floats and a chisel.  My thinking is that I’ll make one edge float, one side float and a matching thin chisel.  The only harden-able steel I had on hand in an appropriate size was some 1095 high carbon hot rolled bar stock left over from a damascus knife forging project.  If I was buying material I’d probably order some precision ground O1, but this should work just fine.  It’s 1/8″ thick by 1″ wide.

You can download a copy of the layout pattern as a pdf here: Float Patterns 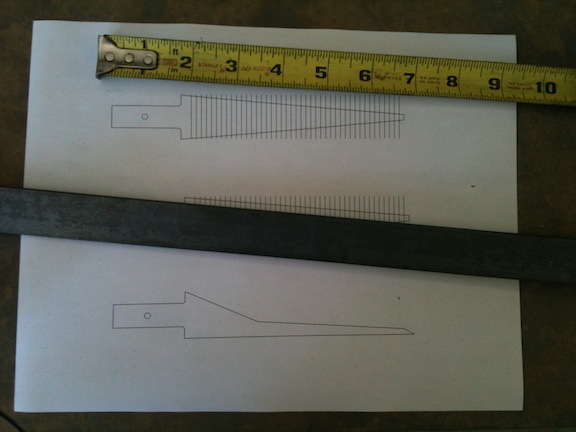 In laying out the floats I used an included angle of 10 degrees.  The angle difference between the bed and breast on this style plane seems to be 10.5 to 12 degrees.  Larry Williams used 10.5 degrees, so a 10 degree float should cover it.  The length of the working area was dictated by the angle and the width of the stock…and the fact that I wanted the overall shape of the tool to flow continuously from the tip through the handle.  The layout lines for the teeth are based on 9 teeth per inch.

I cut off three 7″ lengths of the bar stock, bead blasted the mill finish off and painted them with red Dykem layout fluid.  Then I taped the pattern to one of the blanks and used a snap punch to transfer the key layout points.  I prefer the red Dykem over the blue, I think it shows lines clearer, and if I cut myself it’s not as noticeable on the part. 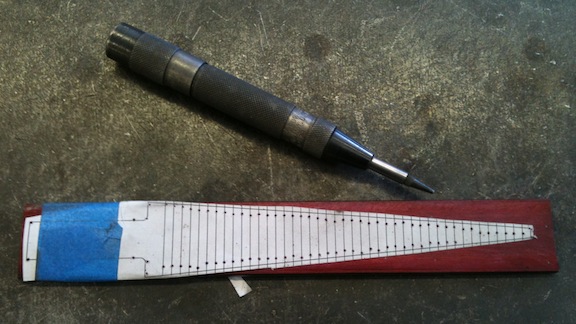 Then I removed the pattern and used a scribe to connect the dots to layout the outline of the float shape.  You could cut this out on a metal cutting bandsaw, with a hacksaw or using a cutoff wheel in a die grinder.  Or maybe a metal cutting blade in a saber saw.  I just used my belt grinder with a 50 grit belt to profile them.  It was faster than changing the blade in my bandsaw, which would have been how I’d do this normally.  I kept a pan of water handy so I could keep the part cool.

After I’d ground the part to shape I used a file to tune up the inside corners by the tang, then traced in onto another blank to make a second float blank. 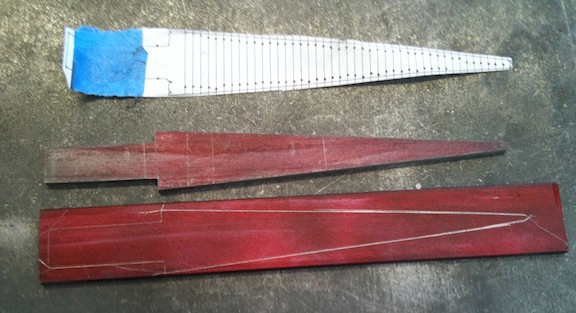 One float profiled, trace onto another blank

Lather, rinse, repeat and you have two float blanks.  I also laid out the chisel and ground it to shape. 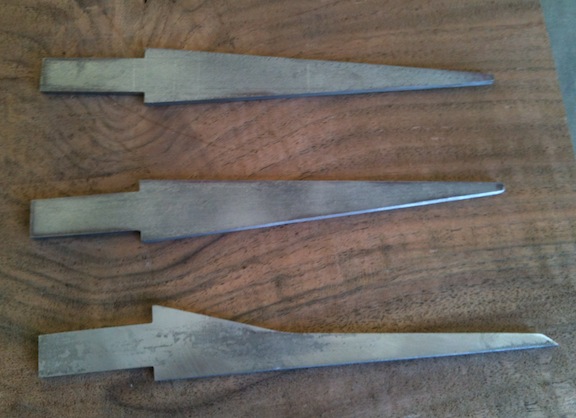